Freemasonry had its roots deep in Rathdrum as many prominent figures in the City were masons. A walk through the Pinegrove cemetery in Rathdrum tells this story on its tombstones which upon close examination you’ll see that many of them bare masonic engravings.

The masonic lodge has had two homes since chartered in 1904. The current home is the building that sits next to the historic Kootenai County jail on 2nd and McCartney. This plot has been home to many buildings with their own histories that each held a predominant place in the story of Rathdrum.

Before it was the masonic lodge it was the Moose lodge. In 1927 it was redone using more flame retardant material. Throughout World War II the lodge was a favorite place for the soldiers of Farragut to convene. Before it was the moose lodge the building was used as an armory and before that it was the Kootenai County courthouse. The courthouse was completed in 1887 and required three additions to fully accommodate the offices and storage space needed to make it the County seat. The County records were kept in a large vault in this building as they had previously been destroyed in a fire. 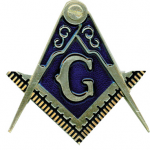